“There are two individuals who I will do work for without payments in advance. That’s because if they don’t pay, it means flying pigs are crashing into the Four Horsemen of the Apocalypse. Otherwise, I just can’t afford to bear … Continue reading →

Source: Pay me. Up front. At least half. Then I start work. – Best Write Communications

The reading public has no time for badly edited, error-ridden books. That’s true in the traditional publishing world, of course—but it’s even more relevant for indie authors. Sloppy work tars everyone.

Source: Everyone Needs an Editor

The copyeditor frequently has to explain her spelling or style choices. In this case, it was prompted by the confusion between Canadian and US spelling.

The Royal Canadian Geographical Society’s choice of the grey jay, also called the whisky jack, as Canada’s new national bird has ruffled some feathers — and the correct spelling of the bird’s name has provoked confused and angry comments from CBC readers.

Source: CBC’s spelling of grey jay/whisky jack is not for the birds 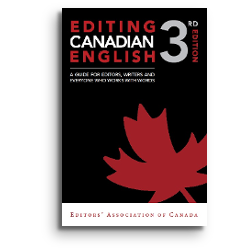 An up-to-date resource covering the Canadian differences in spelling, grammar, punctuation and more. Essential for all Canadian editors. An online subscription is available or the hardcover via Editing Canadian English.

If you’re not sure whether to use “an” before “historic,” here’s a very well-researched guide:

via Wordlady: What the h…?.

Nice to read positive news about my industry!

An awesome new website we had the pleasure of working on — CORE Health Communications. Such a great job of branding and visual work on this one!

This was a satisfying project to work on, a powerful and inspiring story. Check it out:

This sums up my thoughts about life as a copyeditor — effectively polishing and perfecting someone’s writing draws on that vast knowledge of trivia I have accumulated over the years, as well as my expertise with commas and semicolons! “One of the things I like about my job is that it draws on the entire […]